7th Day, the Virginia Synod youth event for 5th and 6th-grades was held over the weekend of March 2-3, at Eagle Eyrie Baptist Convention Center in Lynchburg. Over 160 youth and adults made up Shepard Groups that together joined in the fun and faith-filled weekend learning new songs, making crafts, listening to stories, and playing plenty of exciting games.

The focus for the weekend was set by this year’s planning group youth and adults- Theo Church, Gavin Diehl, Elyse Lohmeyer, Alan McElligott, Saoirse Tucker, event chaplains Pastor Terri Church and Pastor Heidi Moore, and planning group advisor Celeste Wilson. The planning group set the theme for the weekend, “Plant the Seed, Grow the Greatness” based on the Parable of the Mustard Seed in Matthew 13:31-32.

The planning group youth choose to retell the parable as a story of a group of middle schoolers growing into high schoolers and then finally graduates who over the course of several years watch an apple tree blossom from seeds into a full tree. In addition to the planning group skit activity modules for crafts, interactive story, music, and movement each focused on three parts of the parable: planting, growing and serving. This allowed for the parable to be told and retold, again and again, to best allow for understanding and connection in the lives of the 5th and 6th-grade participants. We who are people of the Kingdom of God are important members and participants of that kingdom at all times, whether we are being planted, or growing, or serving!

For the interactive story module, led by Valerie Dombrowski, Sarah Dombrowski, and Heather Browning, the Shepherd groups saw the parable come to life. There they saw reenactments of the parable and learned what parables were and how Jesus used them as a teaching tool. The group also got to play fun group building activities, like Mustard Pictionary, a real-life game of Clue to find Colonel Mustard, and more.

In the crafts module, led by Greg McCorkindale and Diane Bayer, Shepherd Groups creatively interpreted the Parable of the Mustard Seed, such as painting small planters that they could grow their own seeds in. They also decorated wooden trees that they could use as a decoration or a gift to tell someone else about the parable they heard over the weekend.

In the movement module, led by Jayme Kokkonen and Hillary Long had Shepherd Groups played lots of silly games like Seed, Bird, Tree which was a variation of Rock, Paper, Scissors. They also got to ‘plant seeds’ in a tic-tac-toe relay race. At the end of the weekend, each group received a verse and together planned a presentation of human sculptures. These verses were read while the sculptures were performed during the Sunday afternoon worship. 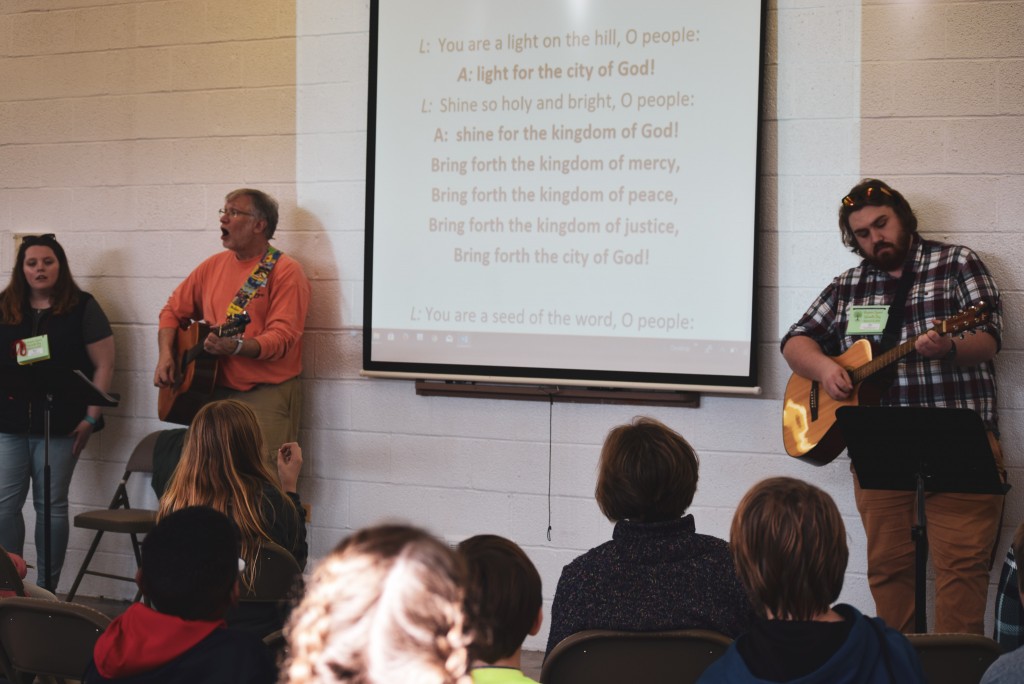 In music, led by Pastor Dave Delaney, Tim Wilson, and Maren Corliss, the Shepherd Groups Shepherd Groups were introduced to new songs to sing and their corresponding movements. The songs learned here at 7th Day often become the returning favorites, as many are sung at other Virginia Synod youth events such as Lost and Found and Winter Celebration! One particular favorite of the weekend was “We Are Marching in the Light of God” which got the participants up and moving in a conga line all around the room!

7th Day provided a weekend filled with fun, laughter, and worship as the 5th and 6th-graders present learned and experienced how whether we are being planted, still growing, or serving, we all have a role in God’s kingdom.

Emily is the Director of Communications for the Virginia Synod. She is a graduate of the University of Mary Washington where she earned her BA in English with a concentration in Creative Writing, and a minor in Digital Studies. If you have an announcement, upcoming event, or news story idea you would like to share, get in touch with Emily via email or by phone at (540) 389-1000